On August 8, 2020, the registry optimization feature in Reg Organizer has been disabled by default. The Malwarebytes flagging has been turned off.

Due to the presence of the registry optimization function (compressing and defragmenting the registry files) and the window offering to share information about the application via social networks (!) in Reg Organizer, the Malwarebytes antivirus has automatically deleted all files of our utility, flagging it as a potentially unwanted program (PUP).

To avoid the inconvenience of our users who are also clients of Malwarebytes and considering that Windows XP support has been discontinued in Reg Organizer since version 8.50, we decided to exclude the registry optimization from Reg Organizer’s interface by default.

This function is not necessary for the operating systems newer than Windows XP. It does not speed up the system nor increase its stability. This has been stated for a long time in the documentation and, since version 8.50, directly in the optimization’s window.

On August 05, 2020 the antivirus software has started to block Reg Organizer again as PUP.Optional.RegOrganizer. We asked the antivirus developers to give us an official position on this issue. No response has yet been received.

On July 23, 2018, the antivirus vendor finally released an official response, which noted that this is a false positive and that in the next update, Reg Organizer will be removed from the database. 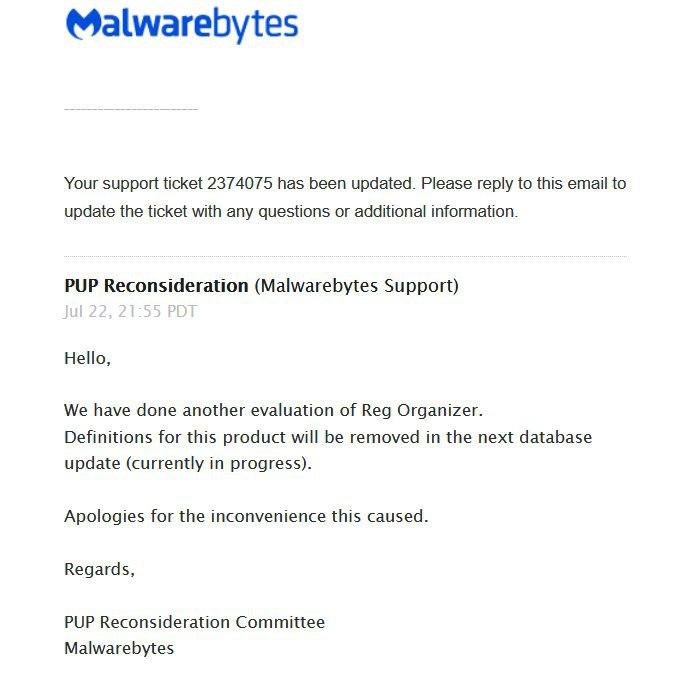 On July 22, 2018, we contacted the antivirus vendor to find out why our program was considered as an unwanted program by their antivirus system. We are yet to receive a detailed response. For now, they could only give an automated message that the program must have been added to the database because it meets one or more criteria for unwanted programs.

On July 20, 2018, our users started contacting us with complaints that a particular antivirus program was removing Reg Organizer and all its data from the user’s computer. This was despite the fact that our program has been used efficiently for many years, even before the antivirus system came into existence.

After investigations, we found out that this antivirus indeed recognizes Reg Organizer as a “potentially unwanted program” and removes it from the system along with utility-related user data. So, it turns out that the antivirus system decides for the user which programs he needs and which ones he does not need.